You and your group take yourselves much too seriously and don’t take your lives seriously enough.

You must do what most people want to do — to do in their dreams, but they dare not bring down into reality. A few men have done what you are about to do, but they are exhibitionists and egoists, little men trying to project illusions to show their contempt for their fellow men. One of their motives is pride. But what is really driving them is fear — fear that behind all of their illusions there is nothing. So while daring to stand out in an extreme way, they don’t dare to drop their illusions and stand naked as themselves, in their selves. They live out of fear and doubt as much as the masses of which they are so contemptuous.

You must not live out of any kind of fear. If you do, you are not who you say you are and will not do what you said you would do. These people whom we have been talking about take their illusions very seriously, believing their illusions are their only selves. They have lost their real spirit, or life, in the reflections of reflections, the thought forms of their egos, their brains. Now you see what I mean by “don’t take yourselves so seriously, but take your lives more seriously.”

Now it is time for most of you to create an illusion to walk about in the world. It is the same process that you used in spirit after you chose the thought form of your present body. After all, your body is an illusion that you created yourself after you and the thought form were matched up. Now you are creating another illusion using thought forms. But your spirit must do the creating, and not your ego or brain. This is what is hard for most of you to grasp. You are told you are the only one who can create you, who knows what you require, and that you owe nothing to anyone else save love. You take this as a command to do what you want, what makes you “feel good”. It does not mean this. Your wants can make illusions without, if you please, a “zipper”. You get trapped in it, having to tear your way out finally, bruising yourself in the process. The illusion that you are creating must come out of you and not out of your wants or from what you think you should do.

What you have created may appear to be taking you into hardships. As soon as I say this, some of you think you have to have hardships and pain, and will start creating hardships and pain for yourselves. This is not what letting you create means; you are just creating another zipperless illusion out of which you will battle. You have to create an illusion that is like clothes that you can put on to deal with the world, and that you can take off to play naked with your friends. If you can’t take the illusion off, you had better start ripping it off because you are trapped, no matter how fine the illusion may be. As the body is still there when it is clothed, you are still there under the illusions; it is impossible to create an illusion as beautiful as you. Know this because it will save you time.

Use your own judgment when you listen to what I say. Believe only what feels right to you.

Your group will be concerned with the creativeness which is in every human, every spirit. This creativeness is truly the God who is the reason for all life. This is so obvious. But Man has rarely understood the process of creating. He starts, let’s say, a painting with a set idea of what he is going to paint. Sooner or later he makes a “mistake” — a color or a line which doesn’t fit in the original idea — which “ruins” the painting. When this happens most people give up, thinking that they are not cut out to be artists, and withdraw back into the common existence. Others try to pretend that they didn’t make the mistake, that the color or line isn’t there on the canvas. They go on painting as before. When they are done, they have painted the shadow of what they wanted. Moreover, this shadow is covered with a haze. Others keep starting over whenever they make mistakes, not accepting any mistakes. They are rewarded for their endurance with the perfect copy of the thought form which they had held for all this time. They are rewarded by what they think they want to create. Their thought form has been brought down into the material plane. The creation is perfect. But it is not a masterpiece. It is perfect within the limitations placed around it by the rigidness of the artist. The work is perfect, but not free.

A masterpiece is perfect and free. The master artist paints an adventure in color, words, or notes. What others see as mistakes, he sees as challenges, boxes out of which he has worked as the basis on which he creates a totally new, fresh pattern. These challenges, boxes, keystones, keep appearing as he works, demanding the artist’s flexibility. If the artist looks back, trying to hold on to what he thought the painting was or would be, he gets trapped in a box out of which he must battle or be turned into a rigid, bitter pillar of salt. The artist has to keep his whole attention on the swirling colors in front of him in order to be the creator.

To create a masterpiece, the artist has to use and risk every bit of himself. But he also has to create with God, for God is the one who creates what most people call mistakes, and that the master artist sees as his tools and materials. God does not create for the artist. God just provides the tools, the guiding bumps. It is up to the artist’s free will whether he creates or gets dragged down by the weight of the tools. When the artist is creating, he feels no weight.

Art of Living
A guide to down-to-earth spirituality as channeled by Frank Moore.
published 1987
https://eroplay.com/books/index.html 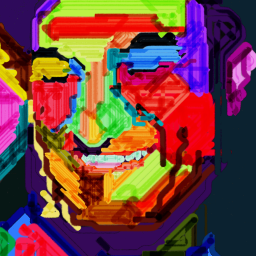